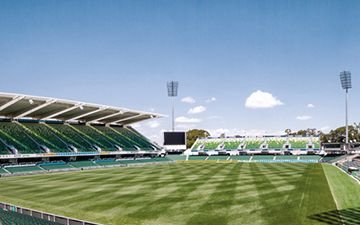 Scope
NIB Stadium required a state-of-the-art CCTV system, including high-definition images with long-range zooming capabilities to ensure all patrons of the venue were kept safe and discouraged from antisocial behaviour. The CCTV needed to be integrated with an alarm system to allow stadium staff to generate visual and audible alarm warnings to patrons.

Solution
Blueforce’s extensive CCTV installation included over 60 Avigilon IP cameras, including the first 29MP fixed camera ever to be installed in Western Australia, connected to a Main Control Room (MCR) via nine consolidation points. Within the MCR, eight Avigilon Network servers were installed with a storage capacity of 115TB.

Four work stations, each fitted with a 42” plasma and a 23” LED monitor, allow total control of the system at all hours. The alarm system panel controls over 16 areas and contains more than 250 alarm inputs, while HLI-integration allows the lighting to be controlled via the Challenger panel. NIB Stadium’s cohesive systems combine to provide top-end protection for staff and patrons.