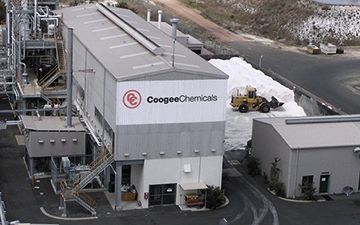 Scope:
Our client Coogee Chemicals operated with two separate alarm and CCTV systems for their North and South sites. An integrated solution was required to connect both sites, with the capacity to extend the system to additional locations in future.

Blueforce has been providing security solutions for Coogee Chemicals for over ten years. The initial installation consisted of 40 access control doors, controlled by two independent security systems. We audited the system to identify and resolve any existing faults, and in 2008 were awarded the contract to upgrade the security system to a Concept 4000, expanding it to encompass both the North and South sites on a single system.

Blueforce upgraded the original CCTV system from 32 analogue cameras to a highly-interactive and user-friendly system featuring over 70 Avigilon integrated-IP cameras. Now controlling over 100 access control points at six locations, Coogee Chemical’s system is one of the leading examples of Blueforce’s capacity to adapt an existing system to a client’s changing requirements.